In early 2020, Stanford University Press released Regulating Human Research, a short exploration of the bureaucracy surrounding human research protections written by Boston College sociologist Sarah Babb, PhD. Also in early 2020, a pandemic set in (you may have heard) that closed offices, including PRIM&R's, and my copy of Regulating Human Research sat untouched on my desk for many months. What follows is a review of this not-quite-so-recent book that takes a serious look at the growth, changes, and consequences of the elaborate apparatus (in Babb's words, compliance bureaucracy) of human research protections in the United States.

Bureaucracy is, for Babb, not an inherently bad thing, as it is for many people in our reflexively anti-bureaucratic American culture. Instead, Babb borrows from German sociologist Max Weber in defining bureaucracy as: “a uniquely effective way of organizing work on a large scale” (Babb, p. 5), featuring robust regulation and recordkeeping by dedicated professionals whose competence and expertise grows with time. Babb’s insight is that the unique regulatory and political environment that has given rise to our human research rules has led, through a number of distinct stages, to unsurprising and rational adaptations that brought the human research protections field to where it is today.

1974’s National Research Act, the Nixon-signed law that brought IRBs into existence, was actually the second legislative attempt to grapple with recently revealed research abuses like the U.S. Public Health Service Syphilis Study at Tuskegee. The first legislative effort was senator Hubert Humphrey’s (D-MN) proposal to create a central National Human Experimentation Board, which “would be empowered to pass regulations, set precedents, and ‘review all planned medical experiments that involve human beings which are funded in whole or in part with Federal funds’” (Babb, p. 18). That bill failed, and the subsequent 1974 National Research Act (brought by Senator Ted Kennedy, D-MA) was eventually “watered down,” in Babb’s telling, creating the diffuse, decentralized IRB system whose broad contours remain in place today.  This watering down came in the context of Cold War-era reluctance to create government activity in any space in which federal interference could be avoided. 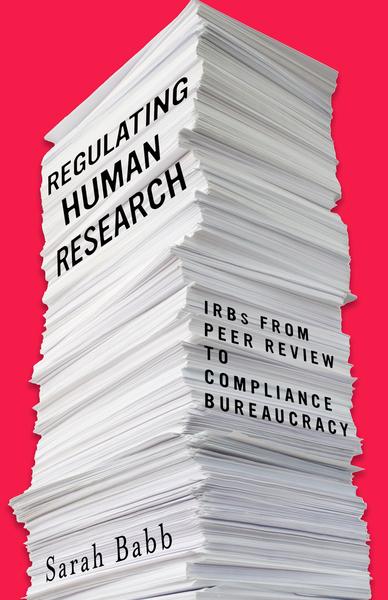 The decentralized IRB system was, for several decades, one of “approximate compliance”: IRB chairs, almost always located at academic institutions and serving in a volunteer capacity, led volunteer boards in collegial, back-and-forth discussions about the ethics of federally funded research at their own institutions. A relative lack of oversight of these boards, combined with a regulatory body (in those days, the Office of Protections from Research Risks [OPRR]) more focused on education than compliance, and vast growth in and commercialization of biomedical research, created space for the dramatic research tragedies of the late 1990s, including the deaths of subjects Nicole Wan and Jesse Gelsinger. These tragedies and the increased public scrutiny they brought forced regulators to take more drastic action, ultimately leading to the complete or partial shutdown of several major research centers. But these events didn’t lead to fundamental changes in the laws and regulations—IRBs were still decentralized and largely autonomous, and the OPRR still had resource limitations which shaped its ability to react to crises. OPRR’s main enforcement tool was the ability to withdraw funding from whole institutions via a retrospective audit; those audits would focus mainly on the ability of IRBs to produce extensive and meticulous documentation that assured regulators that the right questions had been asked of the research.

Out of this moment of high scrutiny and skittish research institutions grew what Babb calls the era of “hypercompliance,” including the founding of the Association for the Accreditation of Human Research Protection Programs (AAHRPP) and a profession—IRB administration—that grew rapidly in both size and scope. (PRIM&R’s membership numbers, which Babb cites periodically throughout the book, grew rapidly during this period; the Certified IRB Professional [CIP®] designation also made its debut around this time.) This professionalization and increased focus on compliance is a rational outgrowth, Babb says, of the intense pressure research institutions faced to keep their doors open, combined with a central research oversight body that didn’t have much proactive authority (at least, compared to other similar nations with more centralized research oversight).  “During the federal crackdown on research,” Babb writes on page 78, “regulators raised the cost of noncompliance without clearly explaining what it meant to comply."

The drive toward hypercompliance included a broadening of the interpretation of the research regulations to include non-federally funded social science research, about which Babb writes from personal experience. She did her doctoral sociological research relatively unencumbered by ethics review, only to watch IRB requirements become stricter as institutions voluntarily opted into Common Rule regulations for unfunded social science research. This overreach, as Babb characterizes it, led to things like requirements for signed informed consent and other obligations that meaningfully undermined social science and humanities’ scholars’ ability to do their research with appropriate methods and ethics. Babb argues (as have many others over the years) that solutions to biomedical research ethics violations should not be applied wholesale to social science research. It is here in the book where Babb’s largely dispassionate narrative becomes somewhat more subjective (though still utterly credible); Babb, as a social science researcher, is invested in a regulatory environment that provides her greater leeway.

The movement towards hypercompliance was immensely burdensome, in terms of both time and money. This led to an era that Babb refers to as a broad rationalization of human subjects protections (again drawing on Weber’s sociological vocabulary, which defines rationalization in terms of notions like efficiency and predictability). Accompanying this era was the proliferation of software programs for IRB review and private as well as for-profit IRBs, all of which were part of an effort to economize ethics review, reducing the costs and burdens of compliance while still staying within the rules. This period—around the late 20-aughts and early 2010’s—also saw a relaxation in some of the more onerous and irrational ethics requirements for social science research described in the paragraph above. Increased flexibility, as Babb explains in chapter 5, is quite compatible with the drive toward more cost-effective, efficient review.

The book concludes with a review of the most recent changes to the Common Rule (which Babb describes as, with some exceptions, mostly marginal solutions to regulatory gaps and problems) and a brief exploration of what alternatives look like in other nations’ research contexts. Babb concedes that despite some of the problems with the decentralized and bureaucratized IRB system (such as  inconsistency from board to board and reliance on potentially conflicted private enterprise) it is a system that has successfully managed to avoid the catastrophic ethics breaches that led to its current iteration.

This final note is a fitting one for Babb to end on. Her fundamental argument is that the shape that our system of regulating human research has taken is unsurprising given the constraints within which it has always had to work—namely, an arguably undersized and under-resourced central regulatory scheme that depends on localized decision-making with very high stakes. The bureaucracy isn’t bad, it just is; staffed by well-meaning and competent professionals engaging in good faith to facilitate ethical research. The IRB professional who may be offended by the implication that they are a mere compliance bureaucrat can take heart in Babb’s lack of value judgment of these trends; each turn in this story is a natural outgrowth of the last. Regulating Human Research is well worth a read for those interested in research ethics and IRB administration (or fans of the sociology of bureaucracy); the book is a highly readable, useful step back to look at the context that made our field into how it looks, feels, and operates today. 3 thoughts on “IRBs as compliance bureaucracy? A review of Regulating Human Research”