This piece, which originally appeared on Speaking of Research, has been reposted with permission.

Understanding what research is, what it means, and how chimpanzees are cared for in captive settings matters to decisions, the animals, public interests, and preventing unintended consequences. 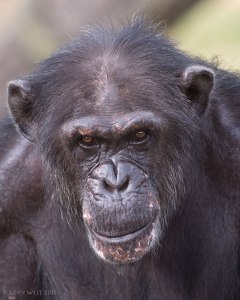 Ongoing decisions and news coverage about US chimpanzee research have provoked continuing debate and raised questions about the best course of action for the animals, science, and public interests. Like many complex, emotional, topics the arguments and language that have surrounded the discussion have been polarized and have left many with impressions that are less than accurate. In turn, thoughtful and serious consideration has often been stymied.

One of the primary areas of confusion surrounds what exactly is meant by the term “research.” Another is what standards of care best provide for chimpanzees’ welfare. Here we cover some common questions about chimpanzee research in the US and the implications and consequences of decisions about chimpanzees living in dedicated research facilities. We also highlight and compare standards for care, external oversight, and public transparency for chimpanzees living in different settings in the US. We share two documents that provide details about the many scientific discoveries published over the past several years from scientists working in dedicated chimpanzee research facilities. One is a list of over 175 representative publications from recent years. The great majority of these scientific publications report discoveries from behavioral, cognitive, and neurobehavioral research. The second document highlights media coverage that demonstrates public interest in these discoveries and studies.

1) Isn’t chimpanzee research in the US finished?

Infectious disease research is not, however, the entirety of chimpanzee research. It is important, but also a relatively small part. Thus, conclusions about the need, value, or future of infectious disease research should not be mistaken for conclusions about chimpanzee research itself. In fact, in the public discussions and headlines about NIH’s decisions, very little attention has been paid to the enormous amount of non-invasive and minimally-invasive research that has contributed to new discoveries and knowledge about behavior, cognition, genetics, social, emotional, and neural processes in chimpanzees. Such research is vibrant, ongoing, and makes substantial contributions, as is evidenced by the many cognitive and behavioral studies that dominate this representative list of over 175 scientific publications over the past several years (Chimpanzee Research Representative Publications (2007-2015)

The work also has broad support. Public fascination and support of research that helps us better understand these animals is illustrated by the plethora of news stories in just the last several years, since the initial NIH decision on retiring chimpanzees from research (Chimpanzee Media List). Furthermore, NIH—as well as NSF and other agencies and foundations—continue to fund this type of chimpanzee research. Last, but certainly not least, much—if not all—of the behavioral and cognitive research with chimpanzees meets the principles and criteria elucidated by the Institute of Medicine panel that reviewed the need and value of chimpanzee research. The panel’s conclusions were accepted by NIH, and their recommendations are reflected in ongoing behavioral and cognitive studies with chimpanzees.

2) Why does chimpanzee behavioral and psychological research matter?

A psychologist who works with chimpanzees was once approached at a conference by an animal-rights activist who heatedly accused the researcher of being a terrible person for confining chimpanzees and doing research with them. The activist argued that chimpanzees were too smart to be kept in captivity. He argued that they could learn language, mathematics, had theory of mind, and showed sophisticated cognitive skills and social skills. The researcher asked this activist how he knew these things, and whether he had worked with chimpanzees or had ever been around them. No, was the response, but the activist had seen all of these things demonstrated in videos and documentaries, and he countered that everyone knew how smart chimps are. The researcher then asked him exactly where he thought those documentaries were filmed, and explained that nearly all of those amazing capacities were discovered and documented with chimpanzees studied, and in many cases nurtured through decades of excellent care, in research facilities in the US.

This discussion highlights the point that it is exactly the behavioral research that is becoming difficult, or impossible, to do in this country that originally led to the public’s recognition and support as they came to see chimpanzees as being worthy of protection. If such behavioral research ceases to exist with captive chimpanzee groups, or only occurs in settings in which longitudinal cognitive and behavioral science is secondary to other management aims, we will lose the chance to learn more about the mental lives of our primate cousins. Imagine that 50 years ago all chimpanzee behavioral research stopped in laboratories. If it had, chimpanzees likely would have been zoo curiosities and little more. Ape language, numerical cognition, metacognition, bartering, reciprocity, episodic memory, and other similar capacities would never have been demonstrated. Considering that makes one wonder whether, in that reality and in absence hallmark demonstrations of chimpanzees’ human-like intelligence, present-day activists would even care about chimpanzees in captivity.

The success of behavioral research in highlighting the social and cognitive sophistication of chimpanzees (and, more recently, the complementary neuroimaging data that show even more similarities between ape and human cognition) has become its own worst nightmare rather than a natural justification for asking new questions of these animals. What we have learned has changed the way that the public and scientists view and treat animals. And it demonstrably has changed perspectives, policies, decisions, and care practices. But it should not result in a blanket prohibition against research with animals. Nor should it be used to support a default conclusion that research captivity is inherently bad, and sanctuary housing is inherently good. Both restrict the apes for their protection and the public’s, and both provide environments that support the animals’ physical and psychological well-being. But it would seem that the best place to ensure that chimpanzees are optimally cared for would be a place that is dedicated to studying chimpanzee behavior and mental health—a dedicated research facility.

If—on the hand—the ultimate result of new discoveries is to truncate research, the costs will be severe not only to our knowledge about these animals’ mental lives, but also to the perceived value of the animals to future generations of humans who will be faced with the imminent extinction of wild great apes and will have to address that threat.

3) Can’t behavioral, cognitive, genomic, and other minimally-invasive research be done in zoos and sanctuaries?

Zoos and sanctuaries have always played an important role in studying the cognition of great apes, and other species. And, that will continue. But, it would be patently false to argue that many of the discoveries of sophisticated chimpanzee cognitive abilities would have been possible in those settings. To give just one example, the ape-language studies with chimpanzees all were undertaken in traditional “laboratories” and often under the support of federal grants to universities. Those projects showed that rearing conditions were critical to demonstrating (and instantiating) the highest degrees of language and communication skills in apes. This research was done in laboratories, not zoos, sanctuaries, or field sites.

4) What is the difference between standards of care for chimpanzees in dedicated research facilities, in zoos, and in sanctuaries in the US?

The picture below shows chimpanzees in four settings. Where are they? Two are current research facilities, one is an NIH-funded sanctuary, and one is a publicly-funded zoo. The settings look remarkably similar because they are in many ways. And to the chimpanzees, the sign over the door – research, zoo, sanctuary—doesn’t matter, as long as it doesn’t affect the animals’ care, housing, and welfare.

The question then, is what kind of housing and care matters to the animals’ well-being. In fact, the majority of research chimpanzees in the US live in settings that are similar. The facilities provide outdoor housing, including natural ground and sunlight. They also provide extensive and complex climbing structures, opportunities for foraging and tool-use, toys, fresh produce and treats, bedding, interaction with expert and compassionate caregivers, and state-of-the-art medical care and facilities.

The standards that govern housing and care of chimpanzees vary, as does the level of external oversight and public transparency. The figure below shows aspects of that variation in terms of federal, public, non-voluntary requirements. Dedicated research facilities that receive NIH or other federal funding are required, by federal law, to provide care and housing exceeds the standards specified by the Animal Welfare Act. By contrast, zoos and other facilities licensed by the United States Department of Agriculture (USDA) must only meet the AWA standards. Any facility registered or licensed by the USDA is subject to oversight by the federal agency. Furthermore, records of registration, inspection, or investigation of complaints are available to the general public via Freedom of Information Act (FOIA) requests. For NIH-funded research facilities, additional oversight and public transparency is provided via the NIH’s Office of Laboratory Animal Welfare (OLAW). 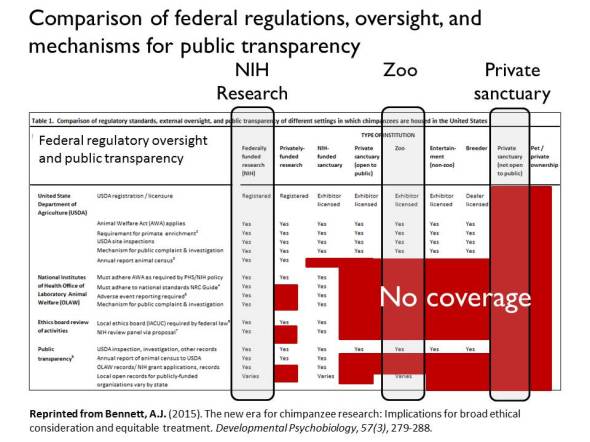 Private sanctuaries are neither required to be licensed by the USDA, nor required to meet AWA standards. It is important to note, however, that some sanctuaries voluntarily elect to be licensed by the USDA as exhibitors. Private sanctuaries do not fall under the type or extent of public oversight or transparency as do dedicated publicly-funded research facilities. That does not mean that the care provided in private sanctuary facilities is insufficient; but it does mean that the public has little venue to ensure the animals are well cared for and virtually no means to evaluate evidence of that care, request investigation, or receive information.

The question for the public, however, is the extent to which standards of care, external oversight, and maintenance of records and information should be left to private, rather than public, agencies. For animals and facilities that are privately owned and administered, this may be entirely appropriate. But for animals and facilities that are public – as are NIH’s chimpanzees and chimpanzee research – it is the public standards, oversight, and transparency that ensure the animals’ care and the public interests. Indeed, when those facilities also support research, additional levels of public oversight exist in the form of peer review (which formally includes review of ethical treatment of animals) when this research is published or submitted for grant support.

In summary, regardless of headlines about the end of US chimpanzee research, there is clearly ongoing work that is humanely-conducted, ethical, of value, and consistent with public interests. The critical questions that remain are about how to best protect the animals and to balance scientific discovery that benefits chimpanzees, other animals, humans, and the environment.

The opinions expressed here are those of the authors and do not necessarily reflect the views of their institutions. The authors are psychological scientists whose research includes studies of chimpanzees and other primates.

One thought on “Guest Post: Where Should US Chimpanzees Live?”