I wrote a short preface in this space yesterday about the profound sense of loss that so many of us are feeling upon learning of Senator Kennedy's death. 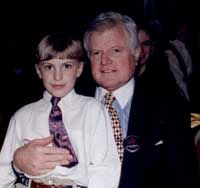 As these pictures suggest, I have been a long time admirer of Ted Kennedy and a bit of a groupie as well. One photo shows my then 7 year old son sitting on his lap at a 1994 benefit for one of our favorite non-profits (besides PRIM&R, of course!). 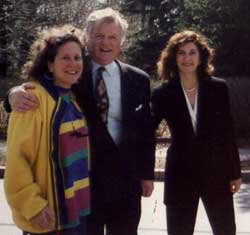 The other shows Senator Kennedy, his wife, Vickie Reggie Kennedy, and me at an outdoor community event about 7 years ago.


I've now dutifully disclosed my potential conflicts of interest, but nothing dilutes or diminishes the fact that Ted Kennedy was a champion of so many issues affecting research, health care, disabilities, maternal/child health, and so much more. His contributions are deep and wide, and, as you all by now know, he was the third longest serving senator in the history of the Senate. He had his hand—and heart—in every important piece of legislation in the past 46+ years, and authored or co-authored 2,500 bills.
Ted Kennedy was widely respected by friend and foe alike, and was legendary for his ability to reach across the aisle and hammer out compromises on issues that were important to the working women, men, and families, whom he represented with a ferocity that earned him the sobriquet "lion of the Senate." He was a master of the art of compromise, owing perhaps to his having grown up in a family of nine children, but, as so many commentators have noted, he never compromised on his principles. The tributes are pouring in, and one report that I found to be a succinct account of a larger-than-life man came from NPR.


In recognition of his extraordinary public service and his legendary legislative achievements, the PRIM&R Board voted at its June 2009 meeting to bestow a “Special Lifetime Public Service Award” upon Senator Kennedy and there will be a posthumous tribute to him at the November conference. During the June Board discussion, two members, Charles McCarthy and Alex Capron, recounted Senator Kennedy’s seminal role (along with Representative Paul Rogers) in the passage of the National Research Act of 1974. He served as Chairman of the Senate Health Subcommittee, which held hearings and drafted the legislation that led to the National Research Act, which in turn created the National Commission for the Protection of Human Subjects of Biomedical and Behavioral Research. As most of our blog's readers know, the National Commission served as the foundation for the Belmont Report and the federal regulations as we know them today.


Senator Kennedy's commitment to strengthening the system for human subject protections stemmed from his obvious anger over the U.S. Public Health Service Study of Untreated Syphilis in the Negro Male, and he was thus determined to move quickly in response to calls for regulation of medical research following those tragic abuses. In fact my friend and colleague, Moira Keane, reminded me yesterday that OPRR (the Office for the Protection from Research Risks), the predecessor of OHRP (the Office for Human Research Protections), produced a series of video tapes in the 1990's and Senator Kennedy was featured on one of them.


Among the Senator's other related activities were his leadership on issues in healthcare and health insurance affordability, privacy in medical treatment, research issues with populations requiring special protection, such as minorities, incarcerated individuals, persons with disabilities, children, and individuals suffering from mental disorders. Senator Kennedy was also concerned with issues in cancer research, working on the National Cancer Act and other issues affecting the formation and funding of the National Cancer Institute.


His legislative skills are well known to all, but his kindness, compassion, and devotion to his constituents made him someone who, in Rudyard Kipling's words, "never lost the common touch." Here in Boston, it was always said that Ted Kennedy was "more Irish than Harvard," i.e., he never lost touch with his family’s roots or culture, and that he would take a call from "Mrs. McGillicuddy" over one from the President of Harvard. Stories of the many ways in which he helped constituents are ubiquitous, and everyone with whom I spoke yesterday all had the same comment, to wit, that he is irreplaceable in the Senate. Massachusetts has its fair share of talented politicians, but no one can fill Teddy Kennedy's shoes…ever.


There is a poem by Maya Angelou that I love, but that I rarely quote, as it applies to so few among us. I last quoted it when the father of the research ethics field, Jay Katz, passed away last November, and I share it with you now in memory of someone who never stopped fighting to make life better for the most vulnerable Americans.


May Senator Edward Kennedy rest in peace. He has earned it. May we not rest, though, until quality health care is accessible to all, and not just to those fortunate enough to be wealthy or employed. As the Senator said "...the work goes on, the cause endures, the hope still lives, and the dream lives on."

From her collection, I Shall Not be Moved

When great trees fall,
rocks on distant hills shudder,
lions hunker down
in tall grasses,
and even elephants
lumber after safety.

When great trees fall
in forests,
small things recoil into silence,
their senses
eroded beyond fear.

Great souls die and
our reality, bound to
them, takes leave of us.
Our souls,
dependent upon their
nurture,
now shrink, wizened.
Our minds, formed
and informed by their
radiance,
fall away.
We are not so much maddened
as reduced to the unutterable ignorance
of dark, cold caves.


And when great souls die,
after a period peace blooms,
slowly and always
irregularly. Spaces fill
with a kind of
soothing electric vibration.
Our senses, restored, never
to be the same, whisper to us
They existed. They existed.
We can be. Be and be
better. For they existed.

P.S. As with all of the blogs posted in this space, the views shared are those of the writer and not the organization.