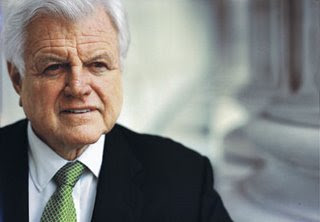 P. Pearl O’Rourke, director of human research affairs at Partners Healthcare System, has been a longstanding member of PRIM&R's Board of Directors. We asked if she would share her thoughts with our readers on Senator Edward M. Kennedy’s recent passing.

In the mid-1990’s, I was a staff member in Senator Kennedy’s office. In the years following, our paths crossed several times and he always greeted me as if I had never left. Last Thursday, I stood on Cambridge Street in Boston as his motorcade traveled through Boston streets, I stood in line at the JFK Library, and I watched the television coverage of his funeral for hours. It seemed the least I could do.He was large in his largesse—my first day on the job well before I had done an iota of work, he welcomed me with a booming voice and heartily thanked me in advance for my help, my expertise, my yet-to-be-defined contributions.
As a staff member, I summarized issues, wrote memos, participated in briefings, staffed him at hearings. Most exciting were the work meetings with Senator Kennedy himself – when called to the office and asked to present facts and defend suggestions and opinions. One did not go in ill-prepared.But best memories are more personal. Going with him to NIH where he met with patients and families and displayed the most amazing mixture of compassion, respect, interest. He thanked them for their time and he humbly said that he needed their help and the insight of their life-experience. Walking down a corridor with him as he burst into song. Rushing out of the Capitol with him as he hurried to a waiting car. He was running late…but on the way to the car, in his peripheral vision he spied a sixth-grade field trip with a number of the kids shyly waving. He stopped—and like a magnet he was drawn to the kids. He wanted to know who they were, where they were from, what they had visited in DC. And then—how he would love to get some pictures with them. Kennedy assigned me as photographer and in an instant there was a puddle of 20 cameras at my feet. I took the same picture 20 times—Kennedy’s smile and esprit was the same in photo number 20 as it was on the first click. The kids loved it… the Senator loved it… I loved it. It was an honor being a part of his team.