A PRIM&R staff member recalls her experience as a research subject and questions the value of informed consent for long-term risks. 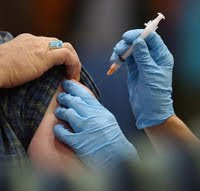 From 2003 to 2005, I participated in an HIV vaccine trial. I visited the research department at Fenway Community Health in Boston nearly a dozen times over the course of a year, spending up to two hours at a time giving blood, answering questions, and wincing through countless injections of an experimental vaccine.

Given my substantial investment of time and energy, I was happy to read news in September that a vaccine trial similar to the one I participated in had finally produced modest success in preventing HIV infection. Reading the article opened a floodgate of memories about "my" trial, which, due to my subsequent experience working for PRIM&R, I now view through a new lens.

I've thought a lot about the informed consent process. Don't get me wrong—I was very well informed about the potential short- and long-term risks of the study. I think that the researchers did an excellent job ensuring I made my choice freely.

But as I think about risks now, especially the long-term ones, I wonder if I would have made the same decision. For example, I'm not HIV positive, but due to the experimental vaccine I received, I would appear to test positive using standard HIV tests.

If I want to document that I am HIV negative, I have to be tested at Fenway, which I can do at any time, free of charge. The researchers did not know how long my false-positive status might last, a minor concern to a single twenty-something (which I was, at the start of the trial). But now I am a married mother of two, and I have had to specifically decline HIV tests during both of my pregnancies. It gave me pause.

There's also the question of whether the vaccine could have been passed to my children in some way, a question for which the researchers did not have a definitive or compelling answer (although they suggested any risk was minimal). It makes me wonder whether I should have had more consideration at the time for my future self—and my future, hypothetical, children.

On the other hand, I recall the outrage that stemmed from federal guidelines announced in 2006 suggesting that all women of child-bearing age be treated as "pre-pregnant." (Essentially, the guidelines suggest that all women of childbearing age should follow the same sorts of health guidelines as pregnant women.) As a feminist and, at the time, newly pregnant woman, I shared (and still share!) that outrage. And I wonder, even if I had been pushed to consider myself in that light, would it have been possible for me to do so, since it was so far out of my mindset at the time?
One thing is clear: there are no easy answers to this question. But I would love to hear your thoughts on this aspect of informed consent.
Photo credit: dbtechno.com

2 thoughts on “My time as a study participant”