On the eve of the New Year, I wanted to share with you a story of love, devotion, courage, and character that has inspired and motivated me.

The story actually begins over 30 years ago when, as a young attorney working to improve the health and mental health care for those incarcerated in Massachusetts, I had a client who was experiencing life-threatening kidney problems. Not surprisingly, my efforts to find a doctor who would see an inmate were turning up empty due to the biases confronting most prisoners, no matter how desperate their medical conditions.

I had called at least six specialists in hopes of finding someone who would not hang up as soon as I mentioned the word "prisoner." Both my hopes, and, more importantly, my client’s kidney function, were fading fast. In fairness, treating an inmate is no cakewalk, as armed correctional officers accompany the shackled prisoner to each appointment, and what was formerly a calm medical office is thereby transformed into a makeshift prison.

I then met a young nephrologist named Andy Levey at the Tufts Medical Center and, from our very first conversation, he was kind, helpful, non-judgmental, and unafraid. Andy is a gentle man with a seemingly permanent smile on his face and a heart that could overflow the Grand Canyon. He treated my client over a period of years and became a true hero to both of us.

I had not seen Andy for well over a dozen years, but then saw him again when I took my son, Micah, to his first day of kindergarten in 1993. My anxiety about Micah’s starting school dissolved in a burst of pleasure at seeing Andy, whose son was in the same class. I told Micah that Andy was one of my heroes, and proceeded to explain why. Since that day, Andy, his equally extraordinary wife, Roberta, and son, Isaac, have been friends and neighbors.

Flash forward to 2009 when Roberta, a beloved and respected oncologist, was in need of a new kidney. Andy was not a match for his wife, but, on December 15, he donated his kidney to a "stranger" as part of a three-way swap. If this were a newspaper article instead of a blog, the headline might read "kidney doctor donates kidney."

I have been thinking about Andy and Roberta for the past two weeks, and so rather than write this New Year’s Eve post about something trite or clichéd, I decided to share their story with you, as it is the story of the greatest gift one person can give to another. My words are wholly inadequate, and, it turns out, wholly unnecessary, too, as Andy, Roberta, and Isaac have sent e-mails that tell their own story in their own words. 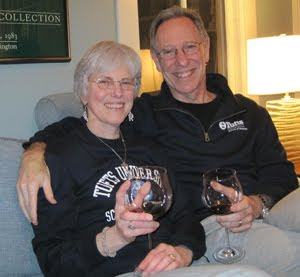 Upon returning home from the hospital on December 19, Andy wrote that "Roberta and I had a chance to meet one of the two other donor recipient pairs in our exchange. They are both doing well. We also hear that the third pair is doing well. It was awe-inspiring to hear the story of the other Tufts pair that brought them, from completely different backgrounds and medical circumstances, to the same kidney exchange program as us. What a miracle that we could help each other do what we could not do for ourselves! I feel great every time I think about what I’ve had a chance to do. This is a great start to a holiday season for celebrating miracles."

Roberta joined him at home on December 21, and wrote that she feels "triumphant and very optimistic," and that "it is a very special holiday season for us."

Finally, having met Isaac on his first day of kindergarten, I was awed by reading his e-mail, which demonstrated uncommon maturity, sensitivity, and wisdom. He noted that "the world can be a pretty grim place sometimes, but today, three people, including my mom, woke up with kidney failure in their immediate future and went to sleep at night with new kidneys and, hopefully, clear paths where that organ is concerned for decades to come. Three people today committed a deeply selfless act and donated a part of their body for someone they loved. We should all hope that if we are ever called on to make such a sacrifice, we can follow the example of my dad and two other kidney donors. And when we are in need, let’s hope circumstances and the generosity of our friends and family are on our side."

Roberta and Andy are such caring, humble, and brave individuals, and their story is what I am holding on to as we enter the New Year. It's easy to become organ donors (by ensuring that our driver's licenses reflects our wishes; it's not so easy to become a living donor, which is why this story warranted telling), but being there – really being there – for those you love, is not so easy.

I’m going to try, though, and I’m going to think of Andy and Roberta each time I am presented with an opportunity to make both my small, and the larger, world a better place.

Here’s to good health and safety for each of you in 2010 and beyond, and may each of us find the strength, courage, and compassion to give to others in need, whether they be spouses or strangers.

2 thoughts on “A Love Story”