When Andy Levey, MD, discovered he was not a donor match for his wife, Roberta Falke, MD, the couple contacted an organ exchange program in hopes of finding another source for the kidney Roberta needed.

In an unexpected—but inspiring—turn of events, Andy donated a kidney to a patient in need, whose wife received her kidney from a donor who, like Andy, could not match his spouse.

But the story did not end there. 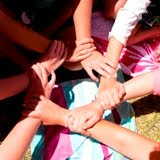